Regarding Asian cake of beehive or honeycomb structure, I have recipes for Malaysian Beehive Cake – Kek Sarang Semut..and 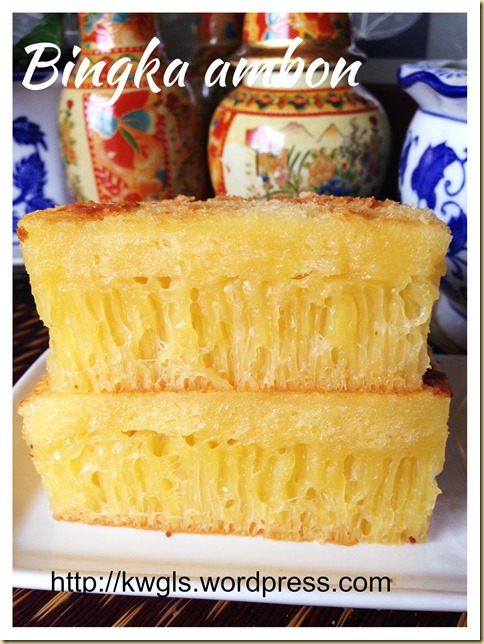 And today is the third cake in this category called Chinese Yeasted White Sugar Sponge Cake..(白糖糕）。It is a rather common breakfast item in Singapore and Malaysia.

In my humble opinion, all these three cakes are interrelated though the type of flour (tapioca flour vs. plain flour vs. rice flour), method of preparation (steaming vs. oven baked vs. stove baked)  and leavening agent (yeast vs. baking soda vs. baking powder) differ rather significantly but the result of the cake are all airy and spongy.

There is a big possibility that they are interrelated resulted from localization of ingredients availability.  I have quite a detail comparison in this post – My Childhood Cake–Bee Hive Cake/Malaysian Honey Comb Cake or Kueh Sarang Semut (蜂巢蛋糕) and you may want to take a look to see the similarities and differences between these 3 cakes.

This must be one of the simplest and fastest  recipes that I have came across that required only about 2 hours to get ready the steamed cake. There are many recipes available and some required fermentation over days or proofing of at least 8 hours etc.… Because of its short period of preparation, I have decided to select this recipe and give it a try.

The batter of the cake is very watery and that shocked me . I am very doubtful about the success of this preparation until the cake was out of the steamer. It is such a relief to see the cake is springy with airy holes. The recipe worked rather wonderfully. It provide a very springy cake like those sold outside. However, I am unsure why the airy holes in between the cakes are rather small as compared to the commercially sold or  the picture as posted  in the original recipe. I am equally puzzled. Taste wise, it is acceptable though I have hope that it have a stronger yeast flavour.

Looking at the ingredients, one will know that this is a rather healthy cake for breakfast. There is no oil (except greasing of baking tin)  in the cake. The sugar content can be adjusted downward to suit your taste buds though I do not think that the cake is sweet as compared to store bought.

“White sugar cake sponge (also called white cake sugar and white pastry sugar) is a type of Chinese pastry. It is one of the most common pastries in Hong Kong.  It is made from rice flour, white sugar, water, and a leavening agent.While it is called a “cake”, it is not served as a circular round cake. It is usually purchased as an individual square piece or a mini triangle. The cake is white in color. The consistency is spongy and soft. The taste is sweet, and sometimes has a slightly sour taste due to fermentation of the batter prior to cooking. Like most Chinese cakes, it is steamed, giving it a moist, soft, and fluffy texture, as opposed to a dry and firm one. If left exposed to the air, it hardens quickly. It is usually kept under some cover to preserve moistness. It is typically served hot, because when it is cold it is not as soft and moist. The batter is either poured over a bowl in a steamer, a Chinese steamer cloth or aluminium foil. If made from brown rice flour and brown sugar it is called a brown sugar sponge cake.” 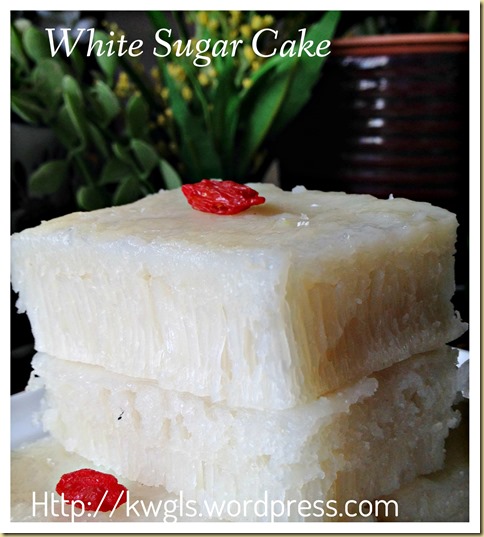 This is considered as a successful cake as it is spongy and with airy holes. The only thing that is lacking possibly is the flavour of wine yeast that were used by commercial stores. If you like the palm sugar version, you can try substituting the white castor sugar with palm sugar. 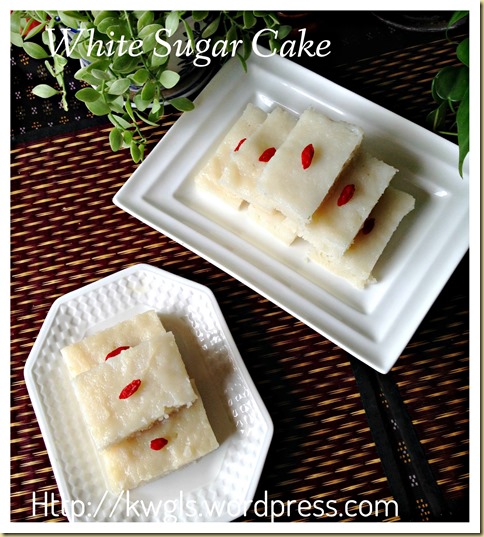