I have prepared the soup again today and have some new picture taking. However, today when I prepared the soup, as I am running out of time, I have decided to by pass the sautéing of the starch and onion. I put everything in the wok, boil until the meat is soft and add the starches. Of course, it was not as fragrant as what my father have prepared but it saves some times.. Kids start to like this starchy soup. Personally, I prefer the yam or taro version but shelve the idea as kids still dislike the taro.

I seldom have soup recipe in this blog except salted vegetable duck soup, a well known traditional Chinese soup for Malaysian and Singaporean Chinese.  Of course I have many other soup preparation illustrations such as bitter gourd and pineapple pork rib soup, double mushroom chicken soup, sweet corn pork rib soup and many more at Guaishushu’s Facebook Page under the index start with “S”. 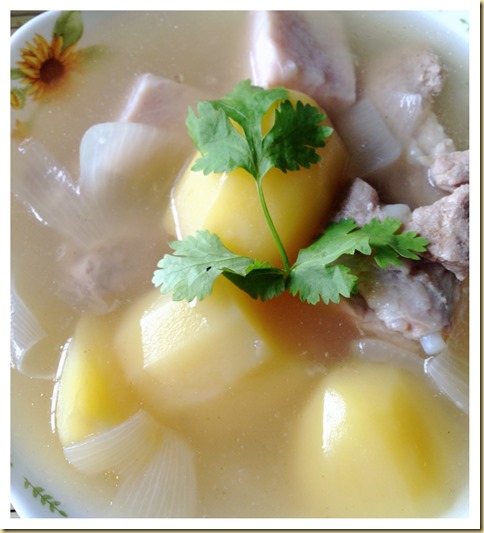 Today, I will share this special soup which is a comfort food with nostalgic and sentimental feelings for me.  I am still in doubt its origins and totally unsure if other families are cooking this soup, not at least my circles of friends. It is hope that via this post, some readers will be able to tell me the origin of this soup!

This is a “strange” soup cooked by my late father. Not even my late mother cook this soup as she said it is a bit laborious to cook this soup.

In fact, the ingredients and cooking method have influences of both oriental and western method of cooking. Talking about this soup, I am sure my brothers and sister in laws can recall about the soup. It can either be cooked with taro or  potatoes. What we usually cooked is with yam or taro and I knew my sister in laws still cook the taro version of this soup as at today.

The potato version of soup what is always in my mind. When I told my mother in law that I wanted to cook this soup, she looked at me unbelievably and she thought that I am cooking ABC soup, a soup that were cooked using carrot, potatoes and onions. I told her no, it is a pure potatoes soup! 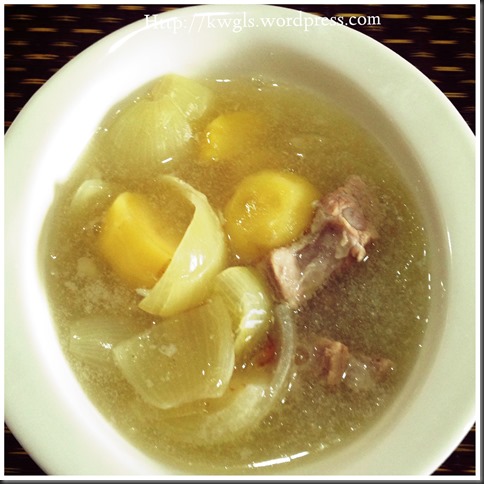 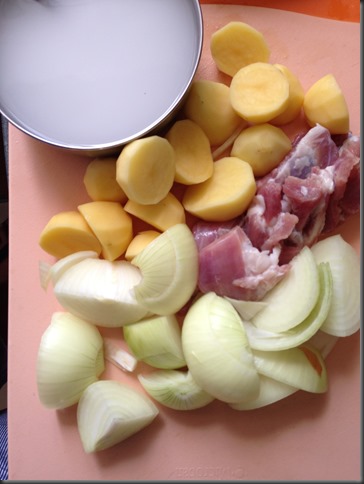 WHY THIS SOUP IS UNIQUE?

The soup has the oriental elements because it is cooked with normal cooking oils used by Chinese home cooking (instead of butter or olive oils) and pork ribs and flavour using the Chinese condiments. In addition, the thickening is using Chinese cooking ingredients sweet potatoes starch. It is definitely more watery and less creamy than Western soup! The final soup still maintain the shape of the potatoes, pork ribs and even onions. It complements the dryness of the white rice.

On the other hand, it is unusual for Chinese to use potatoes to cook soup. Besides ABC soup, most Chinese households do not use potatoes to cook soup. Besides this unusual ingredient, Chinese soups usually do not use thickening agents in soup with the exception of some special soups such as shark fin soups and sweet and sour soups. The soups, in traditional sense should be watery and clear (or whitish colour due to the meat essence in the both). Thickening agents are used in many Chinese dishes including braised dishes, noodle dishes , vegetables dishes, egg dishes, bean curd dishes but not in soup dishes.

For purposes of further illustrating this soup may have Western influences, I have took out portion of the soup and added plain flour (wheat flour as you used for making cakes) and some creams. 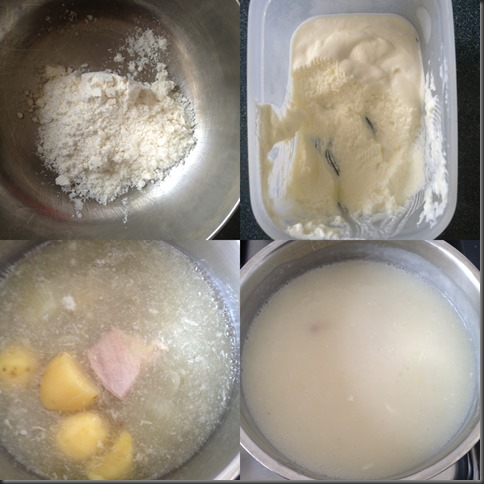 This is what the end product looked like and in fact, my kids do not mind this soup after adding of cream and wheat flour. My boy says that the soup is very creamy like cream of mushroom soup that he used to have in Western restaurant.

Having a post on this particular soup brings me  lots of fond memories and sentimental feelings, making me wanted to know more about my late father. We did not really communicate much due to very traditional Chinese family upbringings whereby we were not encouraged to ask about what the adults are doing. Communication was always unidirectional. However, if he was still available, I would know how to tackle the issue and “fished” out his thoughts!

It is a soup that none of friends knew. It is neither Western or Oriental style of soup. It is a mixture of both. Where my late father learned the cooking of this soup was really a mystery (in my humble opinion). He hailed from China and could not read or spoke ABC not to mention exposure to Western cuisines. The only remote reason that I could think of was due the influence of British colonization of Sarawak until late 1940’s  and at that time, he was a teen. 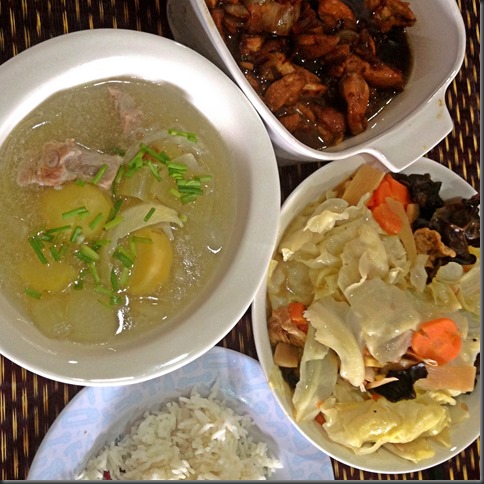 Hopefully by having this post, some of my readers from any  parts of the world can share with me, if you have ever tasted exactly soup cooked in this manner and what do you think is the origin of the soup. It is also hope that my readers will try out this soup and let me know if it suits your taste buds. Thanks and have a nice day. 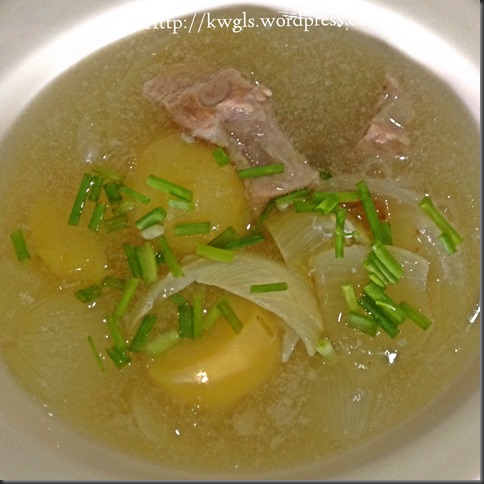