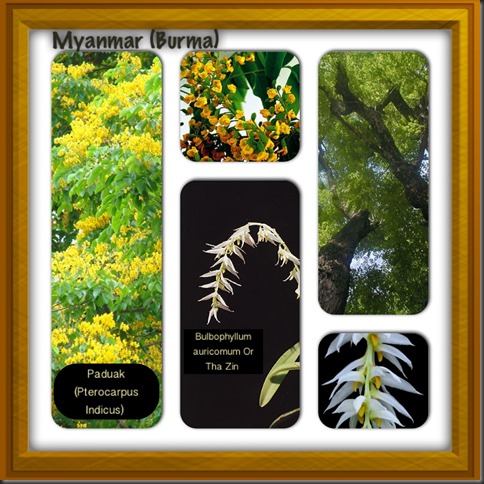 It is known that there are two national floral identities for Myanmar. One is Thazin and the other is the Paduak.

In Burma, the the most beloved orchid of Myanmar is Thazin, (Bulbophyllum auricomum) which blooms with tiny white flowers in graceful sprays that grow out of a small, bright-green, pear shaped bulb. It symbolizes royalties and purities.

Found in Thailand, Burma, Sumatra and Java in lowland seasonal forests as a miniature to small sized, hot to warm growing epiphyte with 3.8 to 3/4″ spaced, ovoid-oblong pseudobulbs carrying 2 to 3, apical, deciduous, rather thin leaves that are often not present at blooming which is on an arching, basal, to 8 3/4″ [22 cm] long, racemose, many [25] flowered inflorescence occuring in the late fall and early winter and has fragrant flowers

This rare, dainty and almost extinct species of orchid is beloved for its simple yet delicate beauty and its remote habitat high up in mountain trees. The likability of the orchid can be seen in the Burmese cultures via songs and the literatures.

At some point of time, they were so rare that no commoner however wealthy was allowed to wear it in the hair. It was only meant for queens and princesses and special envoys had to go deep into the jungles in Rakhine Yoma mountain ranges to collect some of these orchids for ceremonial purposes. Nowadays, people grow it easily with bulbs collected from the jungles but even then, it is still an expensive flower that brides drape around their high chignons.

The Padauk (Pterocarpus Indicus) blossoms in tiny fragrant yellow-gold flowers after the first showers in April, coinciding with the Myanmar New Year festival. and the Water Festival (Thingyan). Once in bloom, the entire tree turns gold overnight.

Due to the large concentration of yellowish flowers in the trees during the blossoming period, Padauk is often confused with Thailand’s National Flower, Cassia Fistula or Golden Shower Trees. Though both trees belong to the Fabaceae family nut Padauk belongs to the Pterocarpus Genus whereas Thailands Golden Shower Trees belong  to the Cassia Genus.

The Myanmar people regard the Paduak tree as the symbol of strength and durability. It was also being featured in the love sonnets fo a 16th century poet king and attached the elements of youth, love and romance to the flowers. The flower plays an indispensable part in traditional and religious ceremonies. The Paduak can be found throughout the country. The wood of the tree is also used for making furniture.

The flowers were worn as beautiful adornments during important racial festivities.