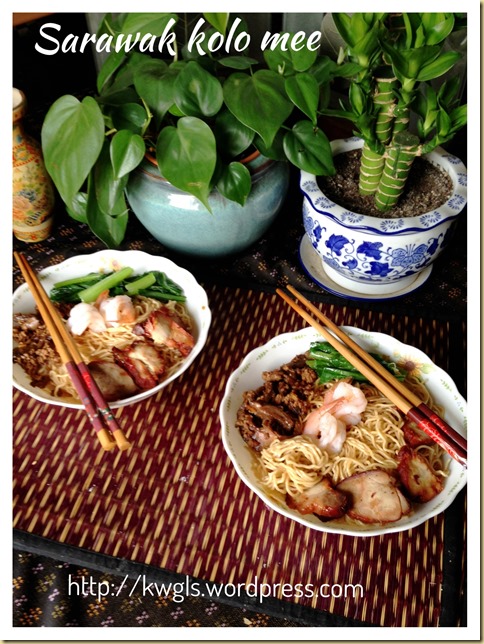 I remembered I started my long post on the famous Sarawak Laksa with these few words….

“Like any other Sarawakians, I am proud of our own version of laksa, Sarawak Laksa. It will not do Sarawak Laksa any justice if I did not do  a detail post on Sarawak Laksa”

The same applies to Kolo Mee, the second most common noodle dish in Sarawak, Malaysia, particularly in its capital city Kuching. As a Sarawakian, it will be unfair to my state of origin if I did not blog about Kolo Mee (or Sarawak Dry Noodles used interchangeably). Kolo Mee, a type of Sarawak dry noodles is deep rooted in the hearts of Chinese especially in the city of Kuching. Sarawakians who are overseas have always  craved for this special noodle and Sarawakian in Sarawak can have this noodle dish as breakfast, lunch, dinner or even supper. There will be at least one store selling Kolo Mee in  any eating outlets. The popularity is just like fishball noodles in Singapore context.

Though popular and unique in its presentation, however, I am reluctant to say that the noodles originated from the State of Sarawak.  Singaporean foodies who visited Kuching and have the noodles said that it resembles the type of noodles called 车仔面 or Cart noodles which was common in the 1960’s. Some of the images that I have sourced from internet websites do have some resemblances to Sarawak Kolo Mee particularly websites from the area of Xiamen and Chaozhou, People’s Republic of China. In Singapore, there is a type of wanton noodle called Kluang wanton noodles, it is rather similar in taste and noodles textures. The same for the Feifei wanton noodles in Joo Chiat Road, Singapore, the taste are closed but not exactly the same.

The popularity have started to expand to places besides Kuching. In Singapore, there is a rather big restaurant chain called Jiaxiang Sarawak Kolo Mee and some hawker centres selling it. In fact, Singapore’s Channel 8 do have a TV show recently on the SARAWAK KOLO MEE. I understand there are also stores in Kuala Lumpur and Johor Bahru, Malaysia that sell the noodles. 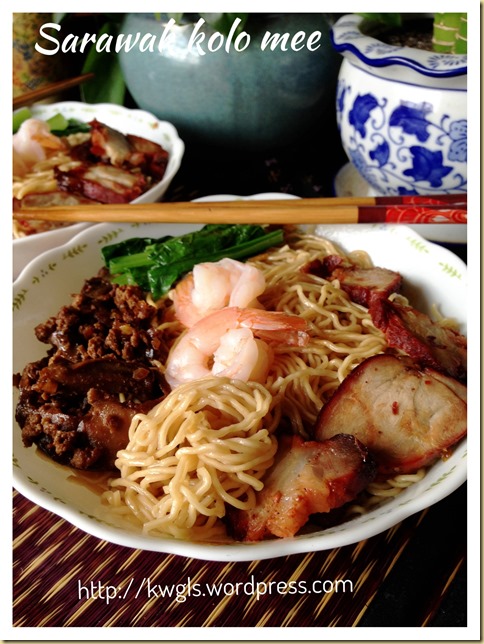 Besides, in bigger cities where there are a lot of Sarawakian’s residing such as Melbourne, Perth, Toronto, the noodles were being sold in local Sarawakian restaurants.

If you stay in Kuching, Sarawak, it is rather unlikely that you will be preparing this noodle dish yourself since it can be easily bought  in any eating outlets. Prices are generally reasonable and not many foodies will want trouble themselves to prepare such noodles. However, in overseas, foodies may have to wait  for the relatives to “pack” them the noodles when they visit them from Kuching or they will have to eat at the restaurant at a rather high price. Is it not good if overseas Sarawakians are able to prepare the noodles themselves ?

The challenge of preparing this noodle dish is the type of noodles used. The noodles used in Kuching is a type of springy egg noodles without the use of any alkaline water (碱水）。For size and texture, it resembles the type of noodles used in the preparation of wanton noodles in West Malaysia or Singapore. But the taste and colour are different. The colour is lighter and the taste is without the strong flavour of alkaline water. Being in Singapore, I do not have the noodles like those in Sarawak. I have resorted to the use of two types of noodles commonly sold in the Singaporean supermarkets. One is called “Hong Kong Noodles” with eggs and alkali water usually used for the preparation of wanton noodles  and another noodle is called the “You Mian” without eggs and alkali water. 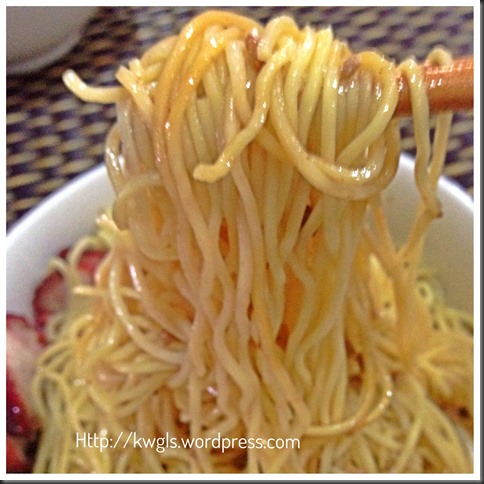 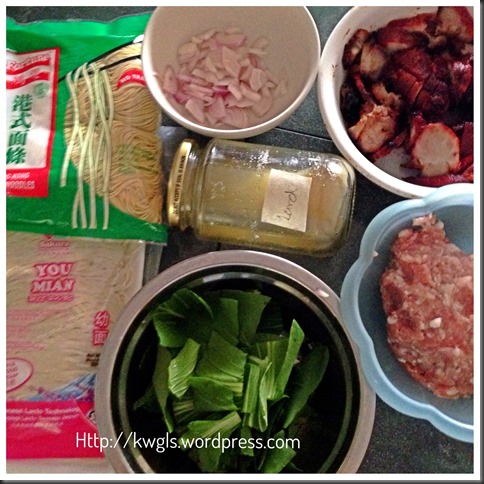 Not in pictures above

Lard is traditionally used in these cuisines and recently I was shocked to know that most of the stalls in Kuching still uses lard in the preparation of this noodle dish. Depending on individual, you can just use cooking oil or olive oil instead.

Preparing the minced meats and blanching of vegetables 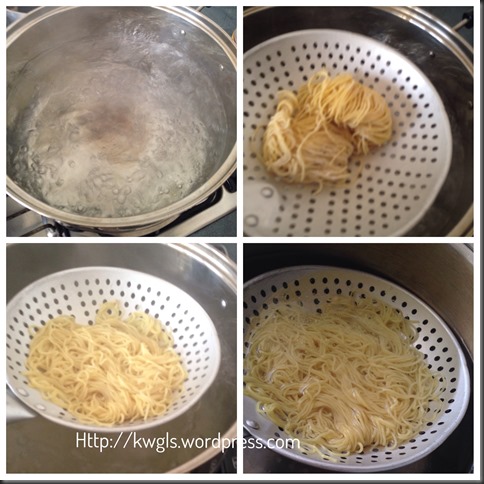 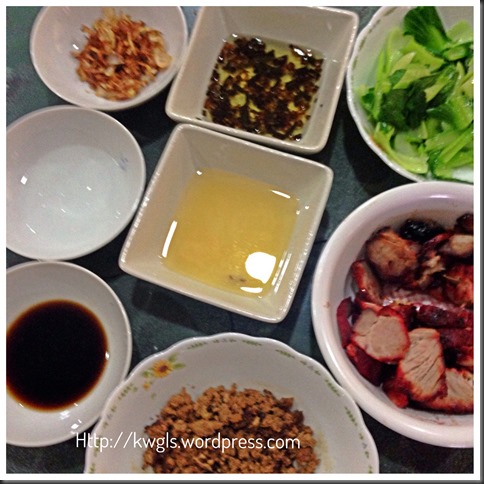 This is a rather long post. The taste of this noodles dish is satisfactory as compared to those sell in Kuching Sarawak. The most obvious difference is the noodles used. As I can’t get the authentic noodles from Sarawak, I will have to substitute with the next best alternative so as to satisfy my palate. I will continue to search for better alternatives in Singapore and I may want to “thick skinned” enough to ask the store owners selling Kolo mee in Singapore where is the source of supply of their noodles? Imported… I seriously doubt? Making at home….?

I was surprised to see my kids having 2 big plates of noodles .. Possibly they are also craving for the noodles. Of course they will not be able to criticize whether or not the noodles that I prepared is authentic or not.

This is a localized and regional dish.. However, I strongly encourage my readers from Singapore, West Malaysia or other countries to try it. None of my circles of friends who visited Kuching have ever reject the offer as the taste is quite an international taste..To conclude: If you like wanton noodles anywhere in the world, YOU WILL DEFINTELY LIKE IT! DO GIVE IT A TRY! It is not difficult to prepare at all!!