Rice dumpling or “Chang” is one of the traditional delicacies that are well loved by the Malaysian Chinese and Singaporean Chinese communities. However, nowadays, most families do not really wrap their own dumplings at home. They will buy the Chang in shops, restaurants or even supermarkets.

The price of the Chang will gradually be pushed upwards by another 100% by the date of  the Rice Dumplings Festival (or Dragon Boat Festival or Duan Wu Jie 端午节). Two weeks before the Rice Dumpling Festivals, assuming the price per rice dumpling is SGD 1.50 before the increase, the seller will increase 10cents per day and it will become to SGD2.90 by the time of Festival. This price is grossly underestimated and actual prices can be in the range of SGD3-4 per rice dumpling from a more reputable shop to SGD 5-6 from posh restaurants.

WHY SUCH A HIGH PRICE PREMIUM FOR THE CHANG?

It was a sad fact that peoples of my age are not really keen to make the chang themselves. Chang was able to command a high price premium because of the basic economic laws of demand and supply. There are lots of demands for Chang especially near the Rice Dumpling festival. However, supplies were limited to a few Chang shops since most families are not willing to prepare their own Chang.

The next question will be to understand why families did not consider to wrap their own Chang? In my humble opinion, most people do not wish to prepare their own Chang due to the following factors and beliefs which personally, I think are misconceptions concerning Chang making:

Due to above the reasons, most families are not willing to wrap the Chang!

The first day will usually involve the cleaning of the leaves for wrapping, soaking of glutinous rice, the dicing of meats, mushrooms and other ingredients and frying the filings for next day’s wrapping. Early in the morning (may be 4-5 am) in the morning, the wrapping will begin and  when a bunch of Chang is ready (about 20-30 Chang depending on your pot for boiling), the boiling or cooking of Chang begins This will take another 2-3 hours per bunch depending on the size of the Chang. By noon, usually, all Chang will be wrapped and all Chang will be cooked by 4pm – 5pm in the afternoon. The ladies will share the results of  their hard works (Chang) between themselves and bring their portion back to their respective families. Traditionally, they are using big biscuits tin and boil under a kerosene stove. The tin is specially made fro this purpose only.

Don’t you think so after the Chang preparation, the ladies in each families shall be closer to each other due to the need of communications. I would deemed this as a family gathering or family “unity” exercise!

REASONS OF MAKING YOUR OWN “CHANG”

Learning how to wrap the Chang is definitely something that I would like to promote among the younger generations. With the various kitchen equipment and aids, the process of preparing the Chang can be shortened considerably and I hope readers will try the short cut method that I will share with you in Part II.

The benefits of wrapping your own Chang are:

“Zongzi (or simply zong) (Chinese: 粽子) is a traditional Chinese food, made of glutinous rice stuffed with different fillings and wrapped in bamboo, reed, or other large flat leaves. They are cooked by steaming or boiling. In the Western world, they are also known as rice dumplings or sticky rice dumplings.

Laotians, Thais, (who call them Bachang) and Cambodians (who call them nom chang) have also assimilated this dish by borrowing it from the local overseas Chinese minorities in their respective nations. In Indonesia and Malaysia, they are known as bakcang, bacang, or zang (Chinese: 肉粽; Pe̍h-ōe-jī: bah-chàng), a loanword from Hokkien, a Chinese dialect commonly used among Indonesian-Chinese, rather than Mandarin. Along the same lines, zongzi are more popularly known as machang among Chinese Filipinos in the Philippines.”

Therefore, in according to the simple definition, the must have of Chang is glutinous rice and some types of fillings (though there are Changs that don’t have fillings like Kee Chang).

Every regions or Chinese dialects group will have their own versions of Chang. As economy are more and more affluence, the fillings were change over the years. The following 2 pictures shows Chang will a few types of fillings.

Chang with meat type of fillings. Can you spot an abalone and chili padi in the filings.

Chang which is bean based or no fillings at all

You can see there are many shapes of Chang and one of them is called the Pillow Chang. But the basic shape is the triangular shaped Chang. Have you ever seen a cone shaped Chang as shown in the last picture?

Therefore, one can conclude that Chang can have many shapes and fillings and I would not insist whose Chang is genuine and whose is fake. What can be included or what cannot to be included in the Chang.

“Nyonya zong (娘惹粽): A specialty of Peranakan cuisine, these zongzi are made similarly as southern zongzi. However, the filling is typically minced pork with candied winter melon, ground roasted peanuts and a spice mix.”

Nonya Chang belongs to the cuisine of Peranakan communities in Singapore and Malaysia. Peranakans are descendants of early Chinese migrants who settled in Penang, Malacca, Indonesia and Singapore, inter-marrying with local Malays. The old Malay word nonya (also spelled nyonya), a term of respect and affection for women of prominent social standing (part “madame” and part “auntie”), has come to refer to the cuisine of the Perakanans. Nonya cooking is the result of blending Chinese ingredients with spices and cooking techniques used by the Malay/Indonesian community.

The nonya Chang is also “pua kiam ti” （半咸甜粽）meaning the Chang is both sweet and salty at the same time. It is different from the Chang is Taiwan or China which are called Kiam Bak Chang (咸肉粽）。

Nonya Chang are generally accepted by all Chinese Dialects group in Singapore and Malaysia. What differentiates  a Nonya Chang and other Chang are summarize as follows:

1. The usage of coriander powder and aniseed powder in the preparation both of which were considered as Middle Eastern spice widely used by the Malay communities;

2. The inclusion of candied winter melon to make the Chang sweet and that is where the sweet components come from. This obviously is under the influence of the Chinese culture where candied winter melon are widely used in its desserts and believed to have some cooling effects;

3. The usage of screw pine leaves for the wrapping (Pandanus) as compared to the bamboo leaves generally used in other Chang. This is another indication of localization of Nonya Chang since screw pine leaves are not available in China;

4. The usage of other nonya coloring such as the pea flower to color part the Chang into blue or indigo, but part of the rice are still white or light brownish in color as compared to the dark brown color of rice in the Kiam Bak Chang.

5. The inclusion of “sambal” in the fillings and this usually comprises of minced dry shrimps cooked with numerous types Malay spices.

I hoped that via this explanation, you can draw your own conclusions as to what are the characteristics of Nonya Chang and understand why it is call “half sweet half salty’ Chang. 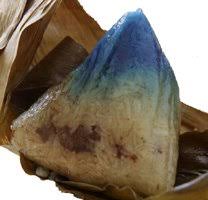 In the above picture, please note that the usage of reed strings, Pandanus leaves, diced or minced type of fillings, blue color of rice, brown dot in the white colored rice (coriander powder), all these are rather typical of a Nonya Chang.

The fact that most families are not willing to make their own Chang is understandable and one of the main reasons is the laborious process involved. However, such process can be shortened and I will share with your the simplified steps to make “my” own version of Nonya Chang.  Though my mother in law cannot agree with my process of preparation saying that I am lazy but she never complain about the ‘”qualities” of the “final products”.

Hopefully, this post will give you another perspective of understand Chang and “design your own Chang”. In Part II, I will share with you the details process in making the Chang.