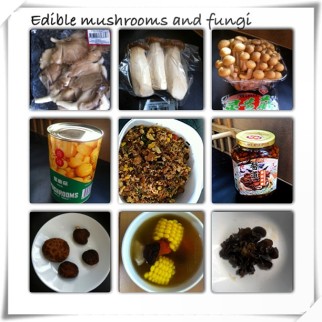 Mushrooms and fungi series – While writing this series,I have to prepare meals for my kids. They are mushrooms fanatics. A search in my fridge and kitchen cabinets found these mushrooms. I ended up preparing fried rice (with lots of mushrooms) and sweet corn soup with other Chinese herbs and dry mushrooms. See if you can find the mushrooms in my fried rice. 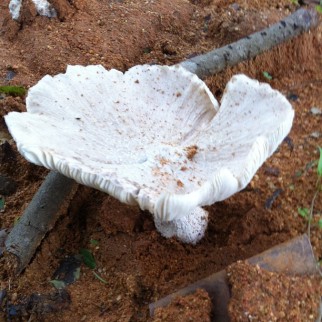 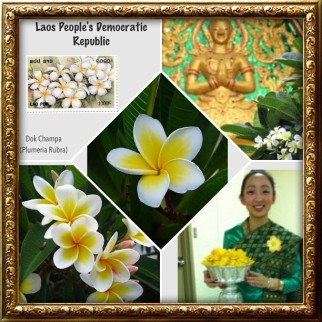 Dok Champa, also known as frangipani or plumeria rubra or 缅栀花(鸡蛋花), is the national flower of Lao People’s Democratic Republic (“Laos”). The trees are considered sacred and planted throughout the country, everywhere from the Southern Province “Champasack” to Northern Province “Phongsaly” especially in the monastic areas. The waxy flower, with a sweet scent, release at night, can be found in many colors: red, yellow, pink and multiple pastels but the national symbol is the white Dok Champa with the yellow center.

In Laos, Champa symbolizes joy in life and sincerity. It is often used as a decoration in ceremonies or made into a garland for welcoming guests. The flowers were also mixed with water and poured over Buddha statues during Lao New Year (Pi Mai). They are used as a garnish of food and drink and don’t be surprise if you found deep fried frangipani in your dishes which was added to impart a subtle aroma.

General information
The fabulous frangipani, Plumeria rubra is a deciduous plant species belong to the genus Plumeria originated from Mexico, Central America, Columbia and Venezuela. It has a stunning flower and were grown in the tropics and subtropics as garden and park ornamental plants. It’s well known for its beautiful and fragrant flowers, the colours of which can vary enormously from white with a yellow centre, through shades of apricot and right through to pink and even dark red.

Frangipanis are always equated with historic, old hat and can commonly found in old ancient historic monastic areas in countries such as Laos, Thailand and Cambodia. In countries like Malaysia and Singapore, it is not difficult to find such plants in the courtyards of the historic residential properties where such plants were planted in abundant due to their easy maintenance and beautiful flowers. However, in some South and South East Asian cultures, the plants were associated with death, vampires, shelters for demons and ghosts etc where such they were planted in the cemetery and used in funerals.

Additional note:
Propagating frangipani is simple by taking a piece of hardwood about 300 millimeters long. Leave the cutting in the sun for a couple of weeks to dry out and then put into some potting mix. Within a few weeks it will have formed roots.

As at to date, Papua New Guinea (“PNG”) do not have any official national flower.
However, Dendrobium lasianthera or Sepik Blue orchid were unofficially deemed to be the national flower. The flower is unique to the Yimas Lakes region of the East Sepik Province , Papua New Guinea and have another beautiful name : “Lady Veronica Somare”,(nicknamed after PNG’s Prime Minister Sir Michael Somare’s wife). It is highly regarded throughout the world because of its purity of color and form.
A large sized, hot growing epiphyte from damp, humid river and streams in lowland forests of Papua and New Guinea below 100 meters in elevation with terete, erect stems carrying leaves throughout the length and have elliptic, coriaceous, emarginate, alternate leaves. The bloom season is from spring through autumn on an axillary, medium length to 1 to 2’ [30 to 60 cm], several to many [10 to 30] flowered raceme with showy flowers that arises from the nodes near the apex of mature leafy canes with water and fertilizer applied evenly year round. (Source: www.orchidspecies.com)

In Andree Millars book ‘Orchids Of Papua New Guinea-an introduction’, the charming characteristics of the orchids can be visualized via the following quotes: “The trees are small, averaging 3 to 4m high, and it is something to remember all of your life-acres of swamp and the beautiful ‘Sepik Blue’ or ‘May River Reds’ in their hundreds standing above the tree tops.” (source: www.orchidsonline.com) 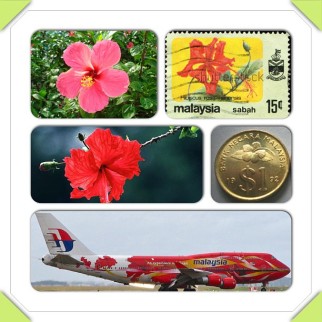 Hibiscus rosa-sinensis is the national flower of Malaysia, called Bunga Raya in Malay. Introduced into the Malay Peninsula in the 12th century, it was nominated as the national flower in the year 1958 by the Ministry of Agriculture amongst a few other flowers, namely ylang ylang, jasmine, lotus,rose, magnolia, and bunga tanjung. On 28 July 1960, it was declared by the government of Malaysia that the hibiscus would be the national flower.

The red of the petals symbolizes the courage, life, and rapid growth of the Malaysian, and the five petals represent the five Rukun Negara of Malaysia.

The flower can be found imprinted on the notes and coins of the Malaysian ringgit. 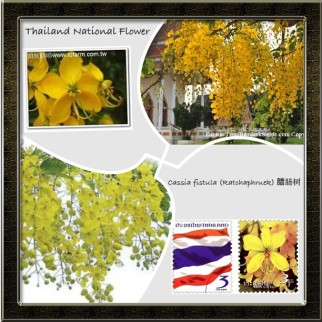 Cassia fistula,(腊肠树) is the national tree of Thailand, and its flower is Thailand’s national flower. It is believed that the the flowers’ yellow color were being associated with the color of Buddhism and the royal family.
It is known as Ratchaphruek, the golden shower tree and other names, is a flowering plant in the family Fabaceae, native to southern Asia, from southern Pakistan east through India to Myanmar and south to Sri Lanka. It is associated with the Mullai region of Sangam landscape. It is a popular ornamental plant and is an herbal medicine. 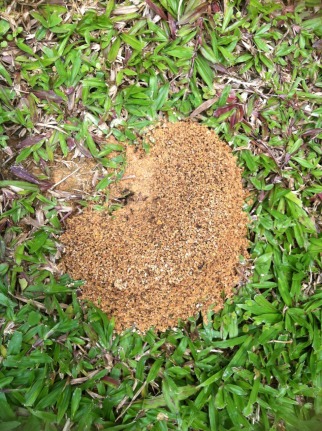 A soil castle in a well crowded housing estate – ants are powerful and diligent!!!! They are cooperative and good followers!!! How I wish I am one of them ……..