“Nelumbo nucifera, known by a number of names including Indian lotus, sacred lotus, bean of India, or simply lotus, is one of two species of aquatic plant in the family Nelumbonaceae. ……… This plant is an aquatic perennial. Under favorable circumstances its seeds may remain viable for many years, with the oldest recorded lotus germination being from that of seeds 1,300 years old recovered from a dry lakebed in North Eastern China. (Source:http://en.wikipedia.org/wiki/Nelumbo_nucifera)”

Nelumbo Nucifera is  the “state flower” for Macao Special Administrative Regions of People’s Republic of China. Beside Macao, India and Vietnam are also using this flower as national flower. But that should not be confused with Bangladesh’s national flower, water lily (睡莲）which belong to the family of Nymphaea.

Lotus is a perennial aquatic plants with a long history and apparently is a leader in the midsummer seasonal flowers. In the heat of summer waves, pools were full of green lotus leaves that waved slowly and its flowers were emitting a fragrance resembling fragrance from the bathing beauties. Hence, In Chinese,  lotus were also called “gentlemen flowers 花中君子” or “flowers of beautiful ladies 花中美人”

Finally, I have finished my national flowers for East Asia and a summary will be compiled for your reference soon. Hope you enjoy the post. 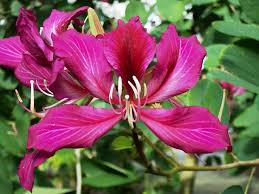 Carnation is Spain’s national flower (or clavel in Spanish or 康乃馨 in Chinese) and widely grown in the Aragon region of Spain. Also called Dianthus Caryophyllus , carnation is a favorite flower of choice and revered for centuries. It’s Latin Name basically translated into flower of god or love. Carnation in Spain is very much influenced by South Spain or Andalusia’s Spanish folklore and commonly associated to distinction, love and fascination.

In Spain, carnation is associated with a symbol of affection between lovers and  a religious symbol related to Jesus’s passion representing Crown of Thorns. It is also  related to the seedy side of Spain like gipsy’s lapels  thrown into the bullring ruedos.

Carnation is a herbaceous perennial plant growing to 80 cm tall. The leaves are glaucous greyish green to blue-green, slender, up to 15 cm long. The flowers are produced singly or up to five together in a cyme; they are 3–5 cm diameter, and sweetly scented; the original natural flower color is bright pinkish-purple, but cultivars of other colors, including red, white, yellow and green, have been developed. (Source: http://en.wikipedia.org/wiki/Carnation)

Carnations are traditionally flowers used to express feelings since olden days. Like roses, colors of carnations carry different meanings and it is wise to find out the meanings for each color before you present the flower to them. In addition, different colors  are used for different occasion. The following table summarizes the common colors, its meanings and occasions to wear them.

Most Chinese  will not be unfamiliar with the above patriotic song which was written for the Taiwanese film “Victory” (梅花) (1976) by its director Liu Chia Chang (劉家昌) and that basically summed up the characteristics of Prunus Mume and the importance of this flower in Taiwan. If you are do not understand Chinese language, you may want to refer here for its Chinese Pronunciations and English translations.

Plum blossom is highly appreciated and admired for its early (January to March in central and southern China) blossoms, Prunus mume has enjoyed great popularity in China and Japan for centuries. It is popular as a bonsai and a ‘must’ in every Japanese-style garden. The world famous Kairaku-en garden in Japan, for example, boasts 3,000 specimens including 100 different cultivars, which create a feast for the eye during the ‘plum blossom’ season in late February/early March. Due to its long history of cultivation and cultural significance, there are more than 300 known cultivars in China, which differ mainly in the color of their flowers (which can be white, pink, red, purple or light green).

The plum blossom, Prunus mei, was officially designated by the ROC Executive Yuan (legislative council) to be the national flower on July 21, 1964. The plum blossom, which has shades of pink and white and gives off a delicate fragrance, has great symbolic value for the Chinese people because of its resilience during the harsh winter. (Source: www.kew.org)

You can refer to this website if you are interested to have a visual differentiations between plum and cherry blossoms. How about taking up another challenges to differentiate these two blossoms with the third blossom, i.e. peach blossoms (桃花）? Magnolia sieboldii also called “Mongnan” or “Mokran” (목란; 木蘭) is the national flower of North Korea. It is usually grown as an ornamental tree in gardens. This species, Magnolia Sieboldii is one of the hardiest magnolias that can thrive in difficult environment and can be found  as far north as the Arboretum in Finland.

It  is a large shrub or consider as small tree 5–10 m tall. The stalks, young leaves, young twigs and young buds are downy. The leaves are elliptical to ovate-oblong, 9-16 cm (rarely 25 cm) long and 4-10 cm (rarely 12 cm) broad. The flowers, unlike the better-known spring flowering  species of  Magnolias, blossoming primarily only in early summer and continue intermittently until late summer. The flowers are pendulous, cup-shaped, 7-10 cm diameter, and have 6-12 petals with the outer three smaller tepals and the remaining larger white petals.  The carpels are greenish and the stamens can be reddish-purple or greenish-white.The magnolia also produces a reddish-brown cone-like fruit in the center of the flower, which contains the seeds.  The fruit is a source of food for birds.

Some people have mistaken Kimilsungia flower, a hybrid cultivar of orchid Dendrobium ‘Kim Il-sung’ of orchid is North Korea’s national flower.  An interesting article explaining about the history of  Kimilsungia (name after Kim Il Sung and Indonesia) can be found here.

Another flower commonly mistaken is the Kimjongilia which is named after the late North Korean leader,  Kim Il-Sung’s son, Kim Jong-Il. Kimjongilia  is a hybrid cultivar of tuberous begonia.

Both Kimilsungia and Kimjongilia are not national flowers of North Korea though  large scale exhibitions of these two flowers were held annually in North Korea.

Paeonia suffruticosa (tree peony) is native to China, where it is known as Mudan.

In front of the Audience Hall of Mu Tsung Huang Ti … there were planted thousand-petalled tree-peonies. When the flowers first opened the fragrance of their perfume was perceived by everyone. Each blossom had a thousand petals, large and deeply red. Every time His Majesty gazed upon the sweet-scented luxuriance he would sigh and say, ‘Surely such a flower has never before existed among men!’ (Ninth-Century Chinese Writer)

The tree peony is not actually a “tree” but more of a woody-shrub preferring some shade from harsh afternoon noon. The woody stalks produce the next season’s flowers and should be left in tact throughout the winter (unlike herbaceous peonies which die to the ground each season). They are very slow to establish, but well worth the wait. Huge blooms appear in mid-spring (before herbaceous peonies) and the flowers are surrounded by lovely fern-like foliage with a reddish tinge.

Writing about national flower China, I found this post that I have read a while ago is now a suitable time to re-blog this. Very knowledgeable writer.