Actually, I have been eating this flat bread for many years and I am still very confused about the name. When I as studying in Kuala Lumpur, it was called roti canai and when I settled in Singapore, it was called roti prata..I have always think that these two are the same   but I believed it is different from the roti paratha commonly found in Northern India. However, it is the same as roti parotta , a variation or subcategory of paratha that is common in Southern India and Sri Lanka.

Does it sound confusing? Yes, it is , the so called Singapore roti prata seems to be parotta from Southern India based on the shape, images and preparation method.. Well may be i am wrong as I have not eaten prata in recent months and I have forgotten about the shape that was sold. However, a parotta is still a paratha, a type of paratha.

“A paratha is a flatbread that originated in the north of the Indian Subcontinent. It is still quite prevalent in the north of India, where wheat is grown and is the traditional staple of the area. Paratha is an amalgamation of the words parat and atta which literally means layers of cooked dough. Alternative spellings and names include parantha, parauntha, prontha, parontay, porota (in Bengali),palata (pronounced: [pəlàtà]; in Burma), and farata (in Sri Lanka and the Maldives). Parathas are one of the most popular unleavened flatbreads in the northern part of the Indian Subcontinent and they are made by baking whole wheat dough on a tava, and finishing off with shallow frying[2] Parathas are thicker and more substantial than chapatis/rotis and this is either because, in the case of a plain paratha, they have been layered by coating with ghee or oil and folding repeatedly (much like the method used for puff pastry or some types of Turkish börek) using a laminated dough technique; or else because food ingredients such as mixed vegetables have been mixed in with the dough, such as potato and/or cauliflower, green beans and carrots.” (Source: https://en.wikipedia.org/wiki/Paratha)

If you read the definition of parotta, the spiralled dough seems to indicate that Singapore and Malaysia version is a parotta:

“A parotta, porotta or barotta is a layered flatbread made from maida flour, from the culinary tradition of Sri Lanka and parts of Southern India, especially Kerala, as well as Tamil Nadu. The origin lies in the greater Punjab region comprising parts of modern-day North India and Pakistan (see Paratha). Parottas are usually available as street food  and in restaurants across Kerala, Tamil Nadu and parts of Karnataka. At some places it is also served at weddings, religious festivals and feasts. It is prepared by kneading maida, egg (in some recipes), oil or ghee and water. The dough is beaten into thin layers and later forming a round spiralled into a ball using these thin layers. The ball is rolled flat and roasted “(Source: https://en.wikipedia.org/wiki/Parotta)

Well, I believed there are some technical differences but be it prata, paratha, cana, canai or parotta it is a nice piece of flat bread. Based on the above definition, I have chosen a parotta recipes from an Indian lady .. Her preparation and final image picture convinced me that I shall try her recipe..

When we talked about roti prata or roti canai, we always thought of swinging the dough in the air and that deter many people from preparing this at home.. People will think that it is not possible to do it at home due to technical difficulties or they have no such skills to do so.. Well, this is not true, come to think about it,, since it is such a popular bread and do all the Indian Households swing their breads at home? There must be a way and the lady’s use of folding method that is logical and suitable for our home setting. 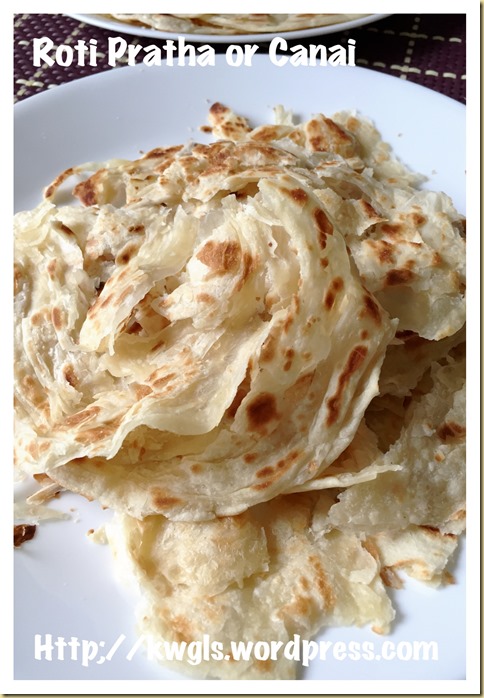 Swinging in a big piece is a beautiful sight and subconsciously we were brainwashed that he dough must be very stretchable with well developed gluten structure and most believed that to attain this stretchability, a special flour shall be used.  Some argue that the roti must used India’s maida flour..  As per Wikipedia : 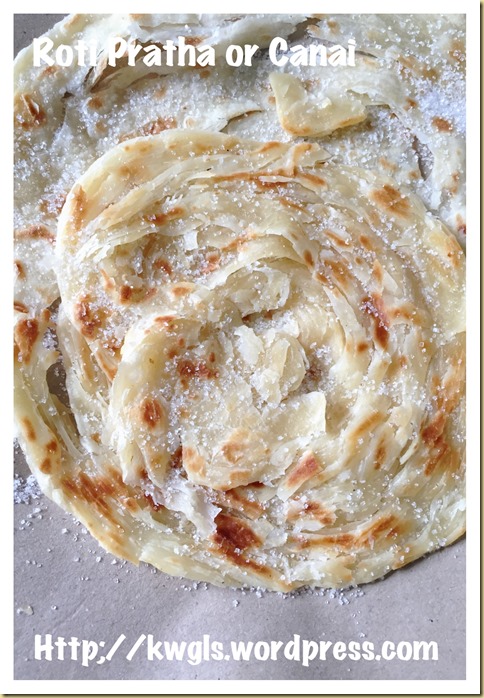 ”Maidaa is a finely milled refined and bleached wheat flour, closely resembling cake flour. It is either naturally bleached due to atmospheric oxygen or using chemical bleaches. Maida flour is used extensively in making Indian fast food, bakery products such as pastries and bread,[1] varieties of sweets and in making traditional Indian breads such asparatha, naan, kulcha and rumali roti. It is similar in nature to all-purpose flour, which is used around the world in the preparation of cakes, pizzas and white bread”. 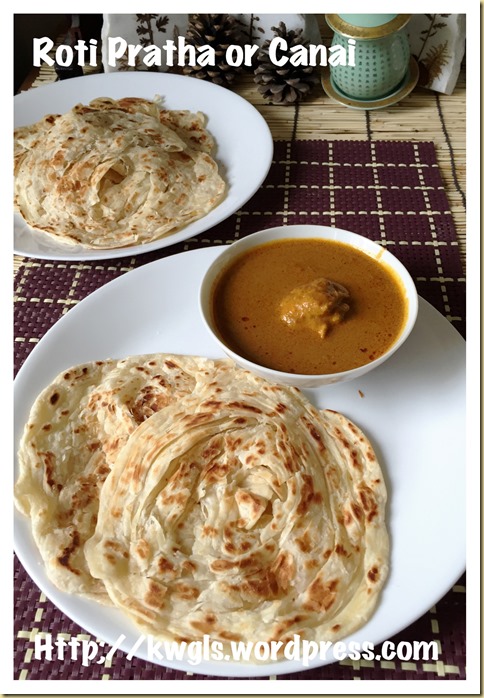 Well, I did not go specifically to search for the flour and unsure if there is such a flour in Singapore, from the definition, I will think Chinese bao flour (Hong Kong flour) will be a good alternative.. However, since Maida is a high protein flour, I would recommend the use of bread flour instead. In addition, while it is ideal to have big piece of stretchable dough , the lady  further assured her readers that it is acceptable that if there are some breakage in the dough film as it will be folded later… No body will know your dough broke during the preparation. Is that not very logical?

Since I have prepared some curry that day, I have decided to give it a try.. Well, it is a very satisfactory batch though it still cannot be compared to the commercial sold.. Hmmm, I ask myself how can I compare my first prata with those who have sold for donkey years..

I did make a mistake in the pan frying part..I have over pan fried it and resulting the roti prata much more crispy.. Well, after the dinner and I sat down and think, roti prata should not be crispy but flaky.. I have managed to get the flakiness and the over crispiness can be overcome by less pan frying time. As this folding is home-style folding, of course , it will not be the same as those sold in shops. I also realized that different stores seems to have different folding techniques, some are like this demonstration using spiral folding but some are like a square folding.. Well, practising a few more time will make it more perfect. 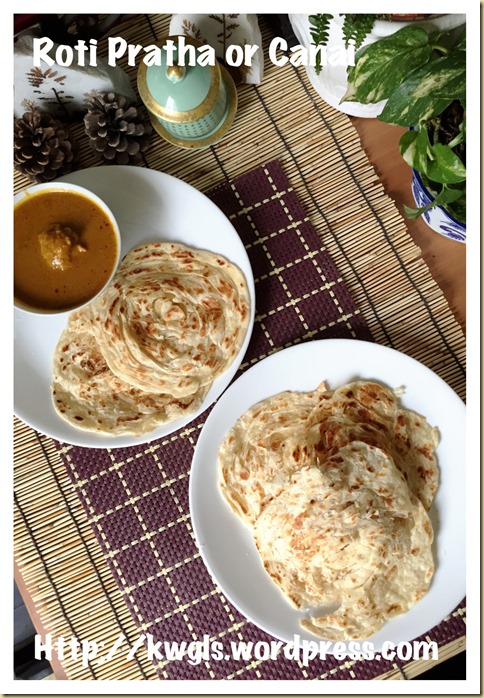 Servings : about 16 pieces of roti prata

I have purposely select a simple recipe that looks doable at home. I have to thank the original recipe provider for convincing me that such type of bread is doable at home… I did it though it can still be further improved.. I do not think home chefs should be extreme or harsh on expectation on your first roti prata or canai.. Give some allowances and I am sure you will like it.. If you found that counter sold is nicer, one of the main reasons is that much more butter or margarine were used. Margarine also make a bread crispier than butter and ghee.. I have seen that the bread dough was dip in a pail full of yellowish liquid. There fore their products will be different. Hope that I can convince some readers to give this recipe a try.. You never try, you never know.. 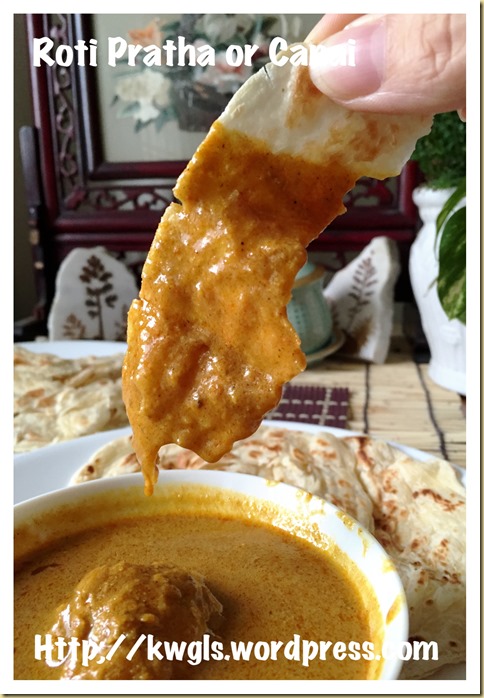 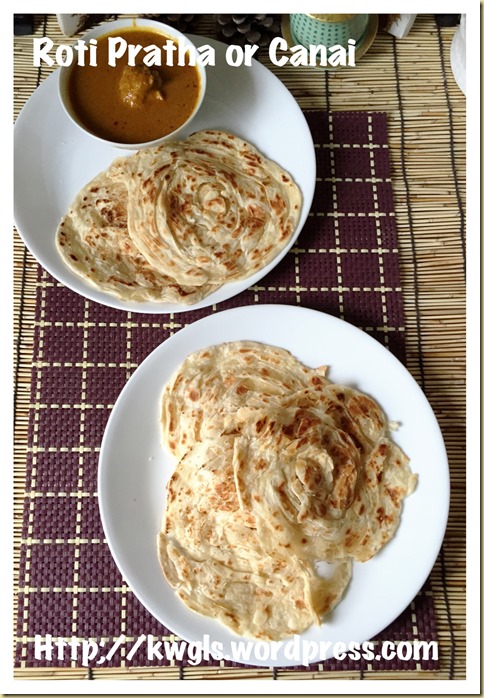