Hmmm, I am still unsure if I have made a mistake in naming of this famous Taiwanese cuisine. Though in English both were called Lu Rou Fan but one in 卤肉饭 which is prepared by braising big pieces of meat and the other one is called 鲁肉饭 which is basically prepared by braising minced meat. However, the method of preparation appeared to be the same. Wiki (as below) mentioned that the word “鲁“ and “卤” had been used interchangeably for many historic years.

Lu Rou Fan is one item that I never miss ordering if I frequented Taiwanese restaurant. I loved that type of sweet, melt in the mouth texture of meat, full of dark soya sauce， fried shallots and mushroom aroma.

My wife have requested me to try preparing this after her recent trip back from Taiwan. She said that she love this hawker snack especially in the famous Shi Lin night market.

“Minced pork rice (Chinese: 滷肉飯; pinyin: lǔ ròu fàn; Pe̍h-ōe-jī: ló͘-bah-pn̄g) is a Chinese-style donburi (rice covered in sauce) commonly seen throughout Taiwan and southern Fujian province. The flavour may vary from one region to another, but the basic ingredients remain the same: ground pork marinated and boiled in soy sauce served on top of steamed rice. The word “Lu (滷)” has the closest meaning to “cooking in thick broth or sauce.” This gives the term “滷肉飯” the direct meaning of “rice with braised meat. However, for several decades, Taiwanese have used the homophone “魯” instead of “滷”. Although people still use the original character in China, “魯肉飯” has become the most common name seen in Taiwanese restaurants and street vendors. 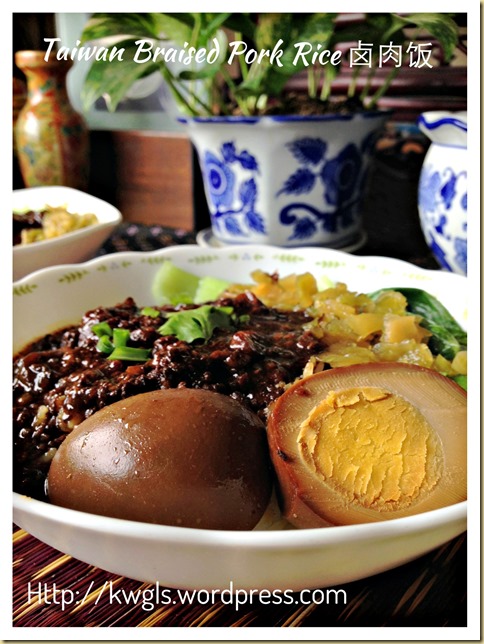 While Minced pork rice is referred to as one important icon in typical Taiwanese folk cuisine, the variety of methods to customize flavours is so wide that it creates considerable differences between regions. In southern Taiwan, where people name it by the sauce “bah-sò-pn̄g (肉燥飯)” instead of the meat, Minced pork rice is preferably served with pork with less fat. People in the north of Taiwan favour a greasier version of meat sauce with rice. In southern Taiwan, while “bah-sò-pn̄g” is seen on the menu indicating Minced pork rice, “ló͘-bah-pn̄g (滷肉飯)” remains on the very same menu, referring to another dish where braised pork belly covers the rice. The same rice with braised pork belly is known as “khòng-bah-pn̄g (焢肉飯)” in northern Taiwan. Minced pork rice can also be found in China, and a wider selection of vegetables such as corn is eaten along with it.” (Source: http://en.wikipedia.org/wiki/Minced_pork_rice) 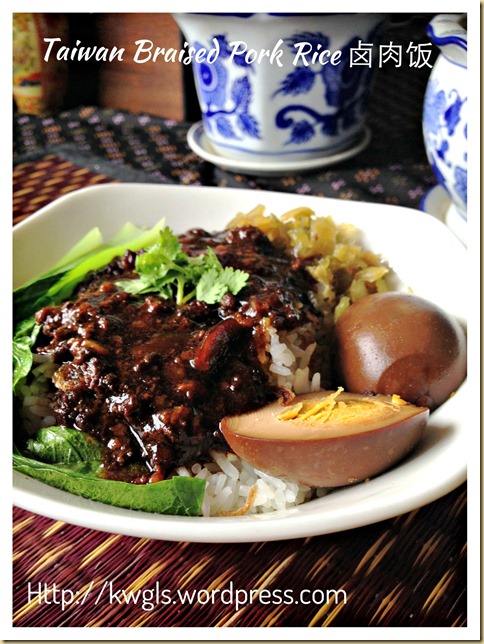 I have used slow cooker to braise the meat overnight. But that is not necessary. You can always braised the meat over the stoves for 3-4 hours or until the meat are soft.

Others (Not in picture) 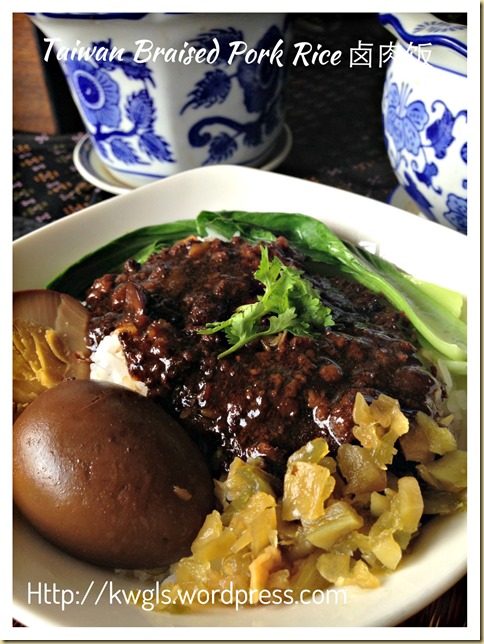 This is a savoury dish and you should try to tailor to suit your family’s taste buds. It is supposed to be slightly sweet, salty, aromatic and a bit greasy. But with the Daikon or other preserved vegetables, the greasiness is negated by the refreshing preserved vegetables. I am happy with this adventure and i hope all of you can give this recipe a try. 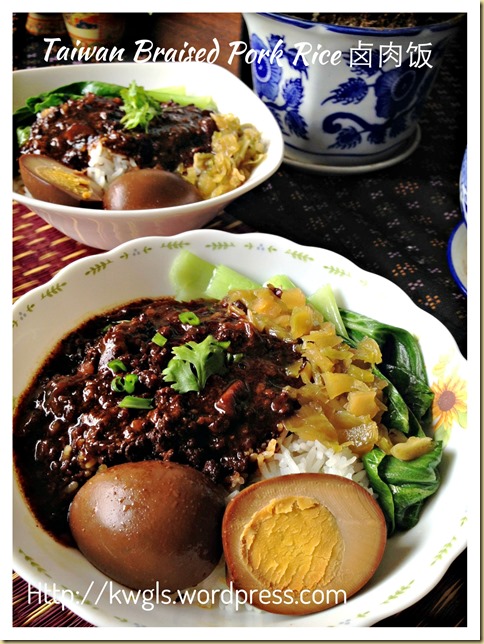